The earthen oven for making the singhorra roof tiles used in east coast Malay houses sits just about 10m away from Jusoh Hussin's house in rustic Kampung Pengkalan Baru, Bachok, Kelantan.
In the shed beside the oven, Siti Fatimah Awan, 50, one of 10 workers at Jusoh's backyard, spreads padi husk ashes on a roof tile mould and puts a slab of clay on it before she pushes the clay downwards with her right foot several times. She uses a wire cutter to slice away the excess and removes a 3mm-thick rhomboid-shaped grey clay.
She makes 35 pieces an hour and gets around RM20 for working from 7.30am to 1pm.

In Bachok, Kelantan, Jusoh Hussin's earthen oven bakes grey clay and turns them into lovely terracotta roof tiles. The bricks on top are used to retain the heat when the fire is lit.
"I used to accompany my mother here when I was little. Then I started working here myself," says Siti Fatimah, a widow with 10 children.
The clay sheets are then sunned for an hour. The women make a small right angle at the straight end of each of the roof tiles to enable the tiles to hang on strips of wood to form a tiered roof.
"Once the number of roof tiles reaches 40,000, we put them into the oven for 10 days. The tiles are stacked up 12 layers from the ground and covered with bricks to retain heat. Then the fire is snuffed out and the clay left to cool for another 10 days," says Jusoh, 60, one of the rare singhorra roof tile makers left in Malaysia.
"My father started the business in 1945 and he had 40 ovens. But by 1977, many roof tile makers folded up because people don't build Malay houses anymore. I told myself, ‘I will continue making singhorra roof tiles and will not let the tradition die'," says Jusoh who took over his father's business in 1965 and now maintains only one oven.
Although no one knows when this dying art was first introduced, singhorra roof tiles are believed to originate from the town of Songkhla, in Thailand. The name is derived from its Malay name Singgora (city of lions). This refers to a lion-shaped mountain near the city of Songkhla.
The use of singhorra roof tiles and peles (gable ends) fitted to the end of the roof, is of Thai and Cambodian influence and is unique to east coast Malay houses. Since Terengganu, Kelantan and Patani were part of the Langkasuka kingdom from the 2nd to the 16th century, they had Thai and Cambodian influences due to centuries of migration and trade.
This century, buyers of the roof tiles are no longer Malay house buyers but hotel and resort owners, says Jusoh.

The earthen oven.
Jusoh has supplied the roof tiles to Mini Malaysia in Malacca, Aryani Resort in Terengganu, Club Med in Pahang and other hotels.
"The clay must be from a swampy salt water area. If the clay is taken from a fresh water site, it will turn white, and not mason brick colour, after baking," he says.
A mountain of clay is stored in the shed.
"When the clay arrives here, it is usually rather hard. We have to add water to the clay and step on it to blend it till the different shades of the clay are well mixed," says Noraini Jusoh, 39, Jusoh's eldest child, who helps manage the business.
"The most challenging part for us in roof tile making is monitoring the fire 24 hours a day in the last five days of baking. We have to take turns to stay awake. We cannot allow the fire to die or become too intense," she says.
Once the clay is baked, it turns into a lovely terracotta shade.
Jusoh says that approximately 7,500 roof tiles are used for a small Malay house. He sells 40,000 tiles for RM4,500 and may get up to four times the amount in a month. The money goes mainly towards paying workers and transporting the clay.
"The singhorra roof tiles are thin and do not absorb or retain heat while the modern roof tiles are thicker and heavier and absorb heat. You need aluminium sheets to reflect heat from the sun, create a ceiling and install air-condition to create a cool environment," says Raja Datuk Kamarul Bahrin Shah, 50, of Senibahri Arkitek, one of five personalities identified by DiGi Telecommunications Sdn Bhd for its Amazing Malaysians 2005 corporate social responsibility project.
Raja Bahrin was selected for his passion in preserving the Malay traditional architectural heritage that is fast disappearing. In this project, he shares his knowledge of and experience in east coast Malay architecture with the younger generation from rural areas. Thirty students were invited to the roof tile factory and the building site beside Aryani Resort in Merang, Terengganu, where a 97-year-old Rumah Tiang Enam is being restored.
"The handmade roof tiles are slightly imperfect and have little gaps between them. When hot air in the building goes up, it moves out through the crevices," he says, adding that rain water will not enter the house despite the gaps if tiles are angled at 30° at least.

Noraini Jusoh, Jusoh Hussin's eldest daughter, shaping the straight end of the singhorra roof tiles into an angle so that the tiles can be hung on wooden strips.
Besides the non-heat retaining roof tiles, building wooden houses on stilts, creating huge windows and small gaps in between strips of wooden flooring help to enhance good air flow. However, due to the scarcity and high cost of cengal and lack of interest among Malaysian developers in building traditional Malay houses, these houses are gradually going extinct.
The cost per square foot of singhorra roof tiles and modern roof tiles is similar. Why, then, don't developers use them in modern building construction?
"It's a chicken-and-egg situation. It's difficult for developers to get them now while suppliers have difficulty getting enough demand," says Raja Bahrin.
"There is also a lack of understanding about the material," he says.
"Moreover, the roof tiles are fragile and people cannot walk on the roof top. They have to be installed from the inside and that requires more work," he says, adding that singhorra roof tiles are only suitable for small and medium sized buildings.
In July, 80 students witnessed the Tiang Sri ceremony in front of the Aryani Resort, to mark the start of Raja Bahrin and his team's work in restoring the cengal wood house Rumah Tiang Enam, which was originally from Kampung Belada Selat, Kepong, Terengganu. Later 30 students were chosen to follow up on the project.
On site, lead carpenter, Wan Abdullah Wan Ahmad, 53, and another worker, climbed up the tall main wooden structure of the house like they would a coconut tree. A crane lifted the huge roof structure and Wan and another worker guided each of the six frames (tiang) to fit into the six frames of the main building structure.
"Some of the wooden materials have rotted and we took extra time to source for original materials. We could have done it sooner if we had bought new material but we didn't want to do that," says Jon Eddy, DiGi's Chief Technology Officer.
Soon Jusoh will be delivering his roof tiles for the house, which is expected to be completed in less than a month's time.
allMalaysiainfo

Originally published in The Star on Monday October 3, 2005 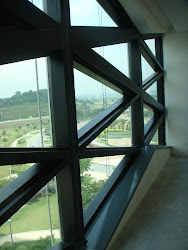